To Be or to Appear: Ca’ Rezzonico and Casanova

Venezia Arte February 9, 2015 ExtraOrdinary Venice Tours Comments Off on To Be or to Appear: Ca’ Rezzonico and Casanova

To Be or to Appear: from Casanova’s Haunts to the Rezzonico Home

This itinerary starts with a fascinating walk dedicated to eighteenth-century Venice. It starts with discovering Casanova’s haunts around Campo Santo Stefano before arriving at Ca’ Rezzonico, one of Venice’s most sumptuous palaces. 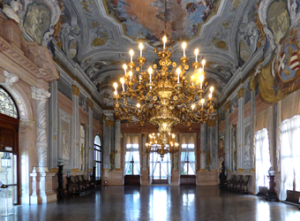 In order to pay for the considerable military expenses needed to fight the Turks during the seventeenth century, the Serenissima Republic conferred the noble rank to over a hundred families willing to donate conspicuous sums of money to the state coffers.

The new patricians set about creating a display of splendour which was translated into grandiose architectural and decorative works. Consequently, the city became full of new palaces and innumerable works of art.

The building was bought by Venice City Council in 1935 and became the Museum of Eighteenth-Century Venice.

The palace’s décor was gradually supplemented with works from other historic buildings of the same epoch, transforming Ca’ Rezzonico into an exceptional art treasure chest. The prestigious building, its sculptures, the paintings by Canaletto and Guardi, as well as Longhi’s intimate scenes of Venetian customs, document the pomp and spirit of a unique century.