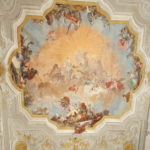 In order to pay for the considerable military expenses needed to fight the Turks during the seventeenth century, the Serenissima Republic conferred the noble rank to over a hundred families willing to donate conspicuous sums of money to the state coffers.
The new patricians set about creating a display of splendour which was translated into grandiose architectural and decorative works. Consequently, the city became full of new palaces and innumerable works of art.

However, the most famous Venetian architects and artists did not just work for the important Venetian patrician families. Baldassare Longhena and Giovan Battista Tiepolo also played a major role in building and decorating the Scuola Grande di Santa Maria del Carmelo. This prestigious confraternity, founded in 1597, was given the title Scuola Grande by the Venetian state in 1767 just decades before the fall of the Republic, thanks to a capital and income that reached the sum of over 230,000 ducats. 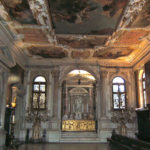 Since the fifteenth century, these large Venetian institutions were considered valid sources of financial aid and represented a useful support to the state. The majestic headquarters of the confraternities and their decorative elements contributed tangibly to spreading a particular image of the city. Investing in their decoration was deemed necessary in order to highlight the concreteness and continuity of their charitable work, affirm their religious devotion and communicate the public honour of the state and the Venetian community.