Hidden Treasures in the San Polo Neighbourhood: a Scuola Grande and an Oratory 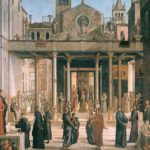 Church of Saint John the Evangelist in the 15th C

The Scuola Grande di San Giovanni Evangelista is one of the oldest confraternities in Venice, founded in 1261 during the period of the Flagellants’ Movement. The acquisition of a fragment of the True Cross, a precious relic donated to the Scuola in 1369 by the French knight Philippe de Mezières, led to the Scuola receiving sizeable donations used to reconstruct the headquarters whose “façade is splendiferous”, as Marc’Antonio Sabellico stated in 1502. Subsequently, artists such as Gentile Bellini, Giovanni Mansueti and Vittore Carpaccio worked on the precious pictorial decoration.

Walking through a labyrinth of narrow streets and squares we come across historic sites fundamental to the history of the Serenissima Republic, including the site where the palace of Bajamonte Tiepolo once stood before being razed to the ground after the famous plot of 1310, and the building where in 1494 Aldus Manutius, the greatest printer of his age, opened his press.

In Campo San Polo we can admire the homonymous church, which was probably founded in the ninth century and rebuilt for the first time in the Gothic period, changing the original Byzantine layout, and a second time in the neo-classical age. 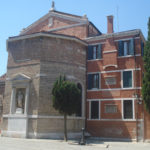 Inside there are still important works by the masters of Venetian painting, including Jacopo Tintoretto, Paolo Veronese and Giambattista Tiepolo. The magnificent oratory, accessible from the main aisle of the church, reveals the masterly work by Giandomenico Tiepolo: the magnificent and dramatic Via Crucis (1747-1749) consisting of fourteen splendid canvases.